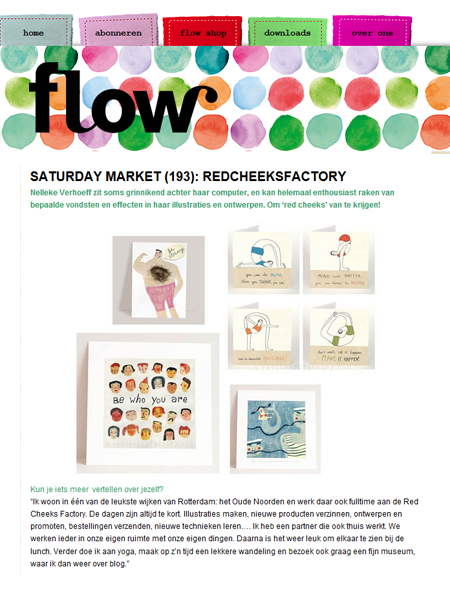 It's in the series Saterday Market, where they feature a shop each Saturday.
This time I'm very happy it's Red Cheeks Factory :-)
Flow Magazine is one of my favorite magazines! Thank you!

You can read a little interview with me (in Dutch) here
Posted by nelleke 2 comments:
Email ThisBlogThis!Share to TwitterShare to FacebookShare to Pinterest
Labels: magazine, red cheeks

Recently I joined the Global Talent Search 2014 organized by the Lilla Rogers Studio.
The theme was 'little terrarium' and this is my submission: BLOOM 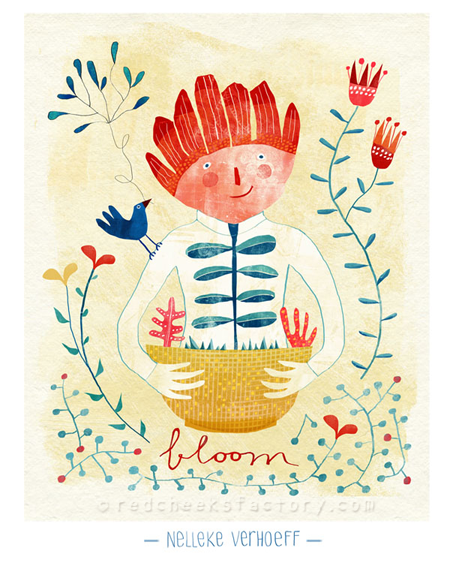 Today the shortlist is revealed. Unfortunately mine wasn't selected.  999 submissions and only 50 were chosen, so I didn't expect it to be chosen, but to be honest I was hoping to make it into the 2nd round and  have another chance to get an inspiring brief from Lilla Rogers.

If you wanna see all the works click here, my BLOOM  is on page 2.

In the end of October I will doing  part B of the course Make Art That Sells.
I'm looking forward to it, because part A was very inspiring!
Posted by nelleke 2 comments:
Email ThisBlogThis!Share to TwitterShare to FacebookShare to Pinterest
Labels: make art that sells

As I wrote before his week the spoonchallege theme is animals. Todayit's one of my favourites: cat. I chose to concentrate only on their faces and made this cat gallery: 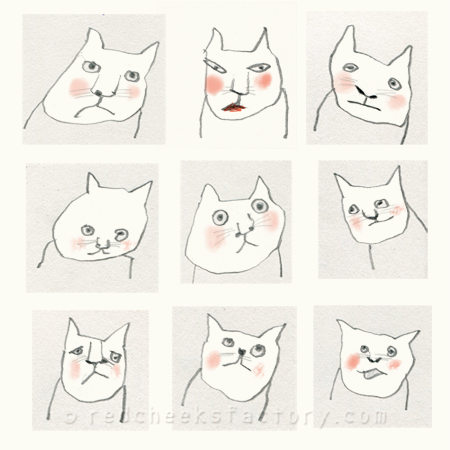 Jus saw my cats are feautured on the Spoonflower blog today :-)
more doodles here: #spoonchallenge
Have a nice weekend!
Posted by nelleke 2 comments:
Email ThisBlogThis!Share to TwitterShare to FacebookShare to Pinterest
Labels: doodle of the day, spoonchallenge

On the 3rd of August Dutch illustrator Sieb Posthuma
didn't see no longer the light in his life... 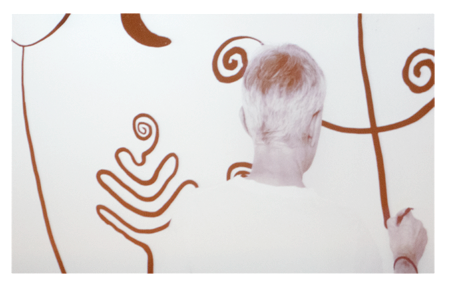 This afternoon I visited his exhibition 'een vijver vol inkt' (a pool full of ink) in the Kinderboekenmuseum Den Haag. A very inspiring exhibition, full with color, lightness, humor and beautiful work. Such a great talent... 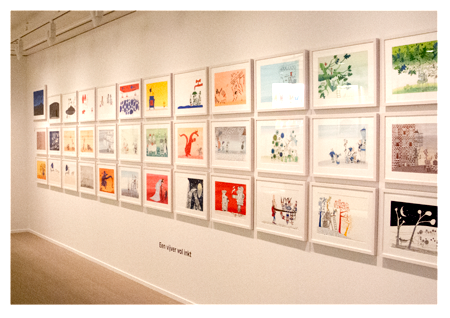 He has made many nice works, books, theater costumes and decors. It is really very nice to see all his work together in this exhibition. A strange feeling to know he is not with us anymore. 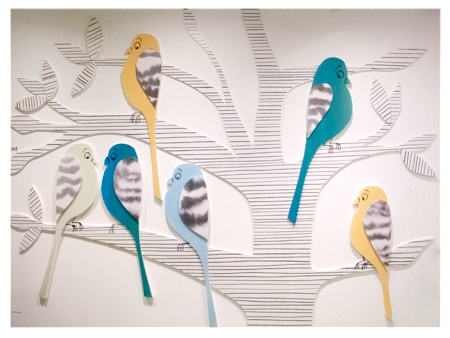 I bought a  book about his life written by Joukje Akveld. You can still vist the exhibition till September. If you have a chance: go!!

Summerschool - Make It In Design - part 2 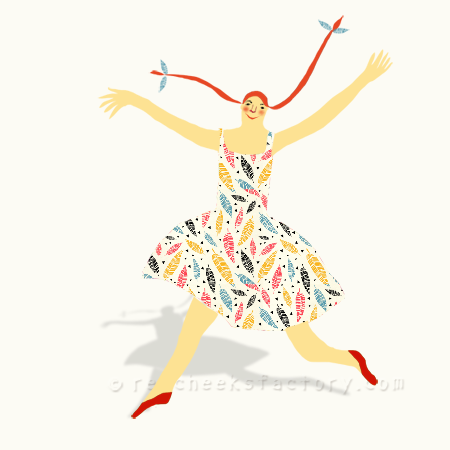 I googled and found lots of interesting shapes. A lot of them were in black and white. The ones I liked the most to play with, were feathers. First I made some various black feathers. (You can nearly see it on this small size, but I also added some triangles to them for more 'tribal' effect). 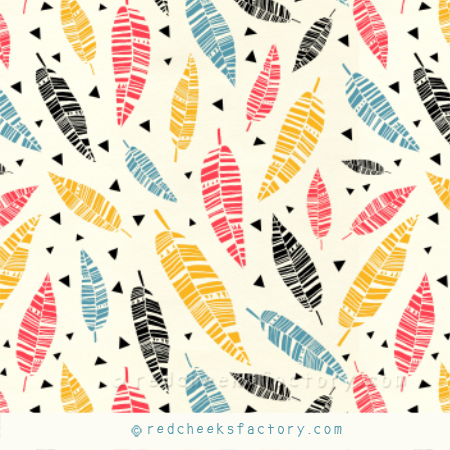 Then I began to play with them. I build a pattern in photoshop and make several try-out patterns in between to see if and how they work. Till I find the right balance. Then I added some color to the feathers to make it more lifely.

I also tried another pattern based on triangles,To try some more in this tribal theme, which is new to me. I like it, but when I saw the two patterns together, I decided (after a lot of positive feedback form my classmates) to go for the 'dancing feathers' 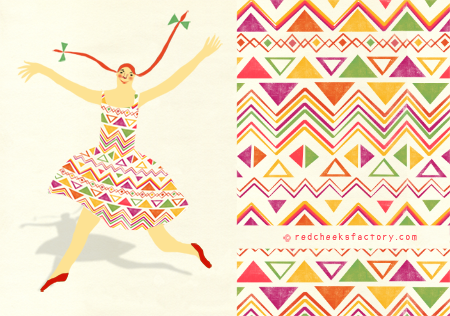 Theme of the intermediate brief: animal ptint. It is not my favorite theme. Yes I do like animals, but I'm not a big fan of panter, zebra and tiger prints. But after googling a bit I saw  ladybugs.  I thought this could make a nice pattern.  Fisrt I drew some ladybug shapes with a marker, scanned them and adjusted them in photoshop into a pattern. 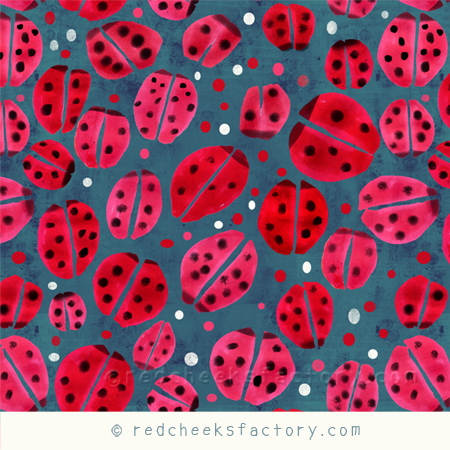 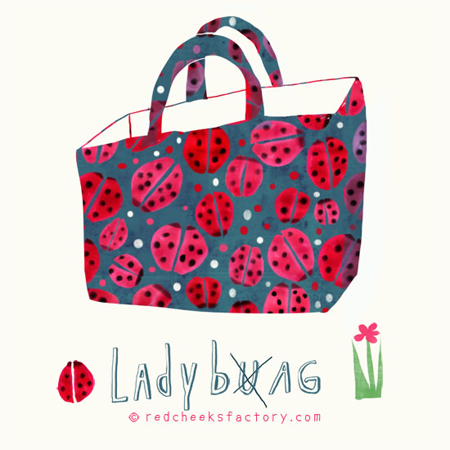 Theme of the advanced track: tribal collage. Tribal shapes mixed with animal prints brought together as a patchwork pattern. I never done that before and it was quite a challenge to get a nice balance in it. To know when to stop, because I don't want it to be too full. It should be a pattern for kids.  I chose for little elephants and bright colors. 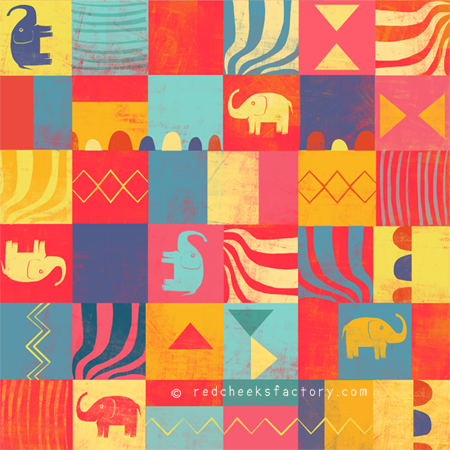 We also were asked to mock it up. On boxes this time. Because I couln't find the proper mock up photograph in time, I made my own chair with two cushions this time. and a bucket, all with the same pattern, but in various sizes. 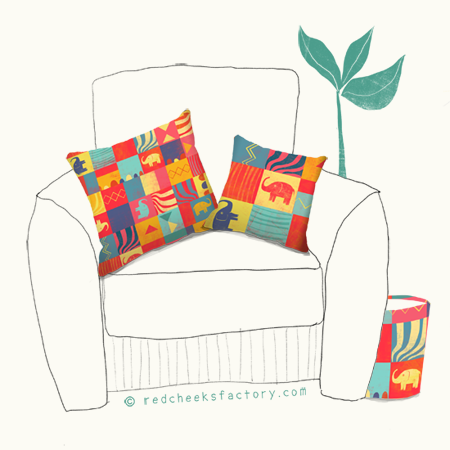 It is very nice this summerschool challenges me to try out different things and make lots of patterns for my portfolio. I really like to make them and i'm always surprised by the outcome.

These and all the other patterns will be shown in the galleries. Published on the 22th of August. Still one part to go, will be continued...
Posted by nelleke 1 comment:
Email ThisBlogThis!Share to TwitterShare to FacebookShare to Pinterest
Labels: pattern, patterns, study

And here's prompt #11 for the 30 days spoonflower drawing challenge: 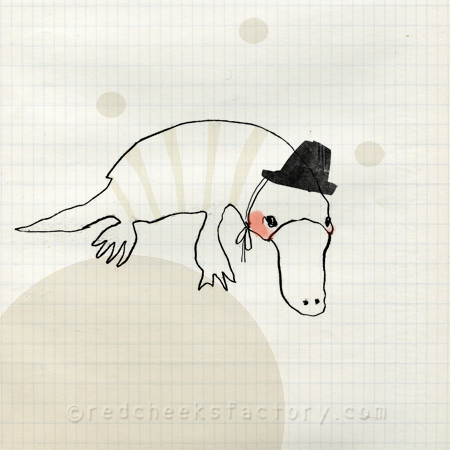 This week it's animal time. I had to google this animal: platypus, a fascinating animal
as if he is made from parts of several animals to one animal. I like him a lot :-)

And here's prompt #1 for the 30 days spoonflower drawing challenge: 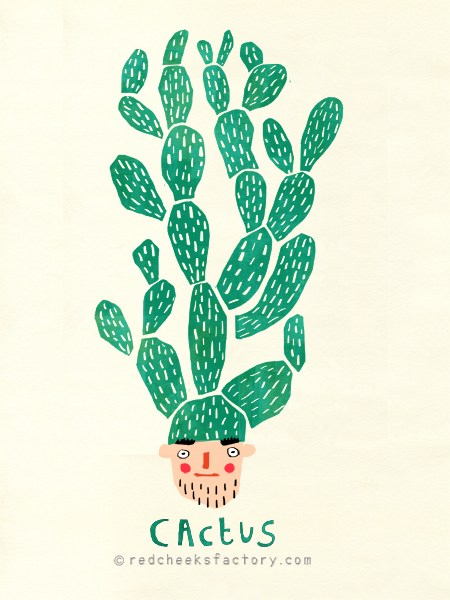 I recently discovered the 30 days drawing challenge on the spoonflower-blog. It has already started for 10 days, but I joined today and prompt #10 was toast. 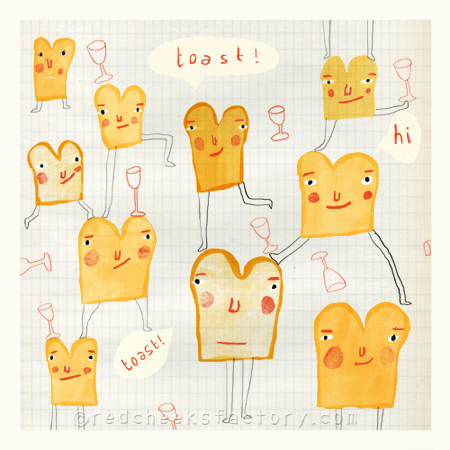 This is my toast doodle of the day. In Holland we also use the word toast as cheers,
To bring a toast to someone. I'm curious: Is this expression known in your country too?

You can find more spoonchallenge doodles under the #spoonchallenge
and maybe you wanna join too! That would be fun!

Have a nice weekend, toast! ;-)
Posted by nelleke 1 comment:
Email ThisBlogThis!Share to TwitterShare to FacebookShare to Pinterest
Labels: doodle of the day, pattern, spoonchallenge, spoonflower 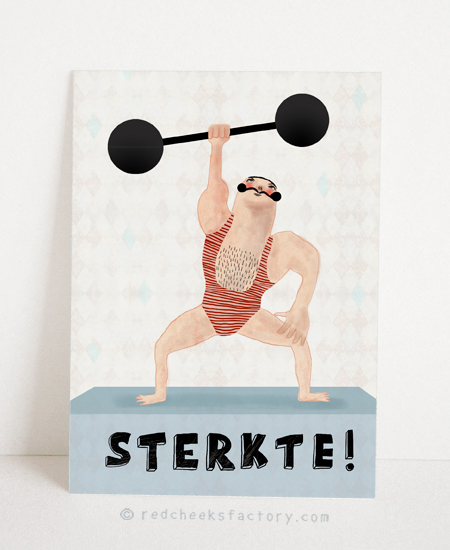 Yippie! 'Biceps Billy' now available as an A6 postcard.
Toghether with a lot of other postcards all made by Dutch illustrators.
You can find them all together at SaltyStuff
Posted by nelleke 2 comments:
Email ThisBlogThis!Share to TwitterShare to FacebookShare to Pinterest
Labels: circus, postcard

Summerschool - Make It In Design - part 1

Here are my first three designs for the 'make it in design' summerschool:

Beginners assignment was to make a tropical summer pattern, I came up with this: 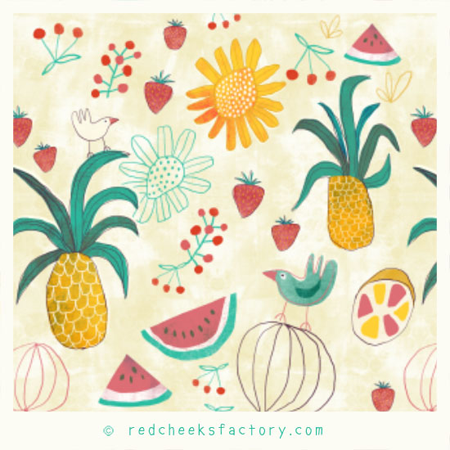 I like to see my patterns mocked up on clothes, so I made an illustration of a tropical girl.

I had to think of the Summer carnaval we celebrate here every year in Rotterdam, all kind of extravagant hats and wigs :) View all tropical patterns of the beginner brief 1 in the summerschool gallery 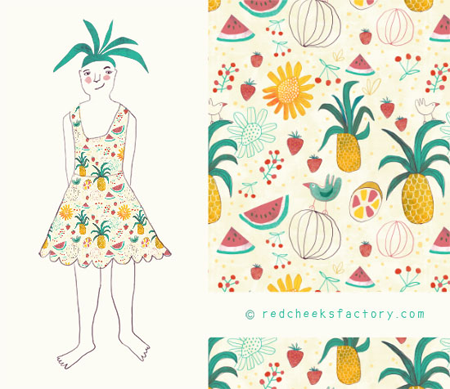 The Intermediate assignment was to make a retro geometric pattern for a bathing suit. 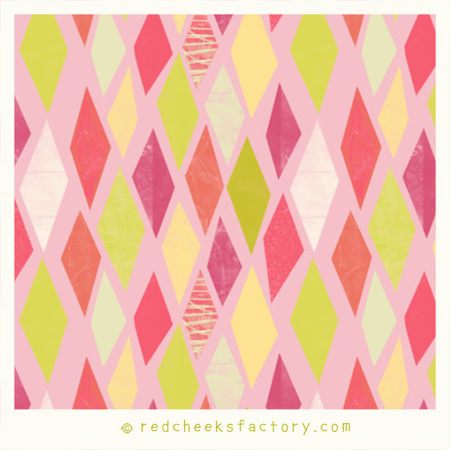 I made several designs, it was hard to choose, but I submitted this ´summer diamonds´ design. Because I thought this was the most appropriate for a bathing suit. View all retro geometric patterns of the intermediate brief 1 in the summerschool gallery 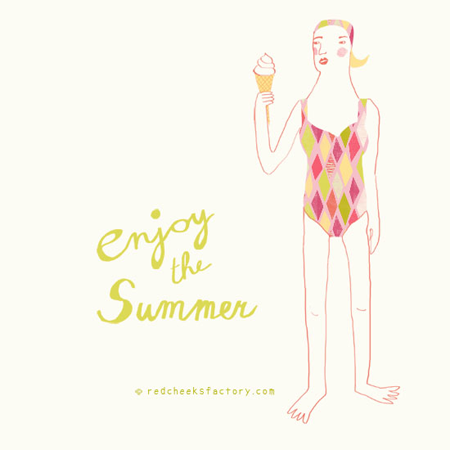 The  advanced assignment (yes, I signed up for that one too ;-)) was to create a water pattern: 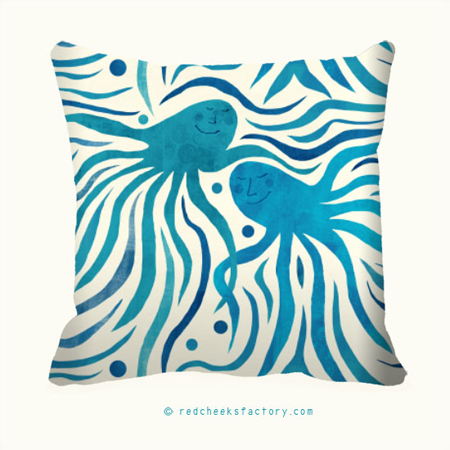 I chose for a combination of dancing Octopuses and waves It doesn't show on the picture but I even succeeded to make it a seamless repeated pattern, which was quite a challenge with this design. View  all water patterns of the advanced brief 1 in the summerschool gallery 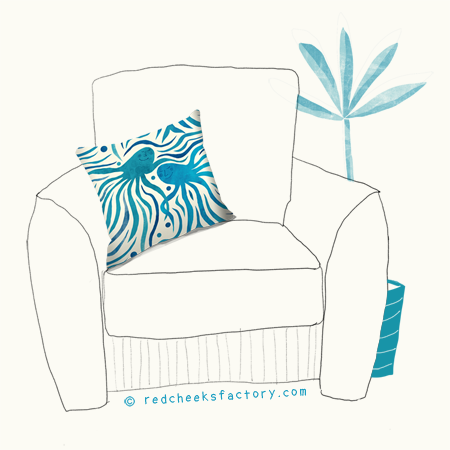 The briefs and the work of the other participants are very inspiring. Next Monday we will get three new assignments. I Hope to find time to accomplish these too. Will be continued...
Posted by nelleke 4 comments:
Email ThisBlogThis!Share to TwitterShare to FacebookShare to Pinterest
Labels: pattern, patterns, study

pattern of the day

I love to make patterns, this is my pattern of the day: 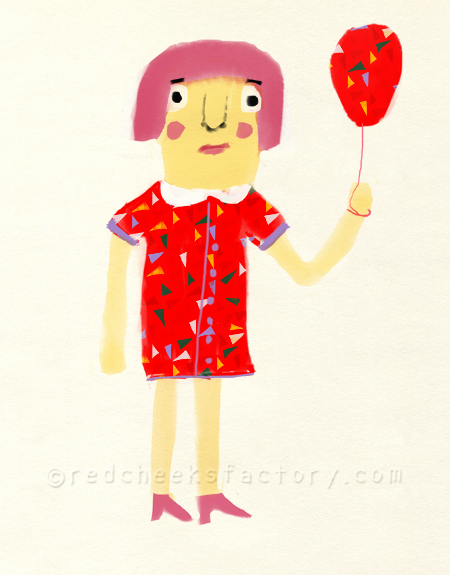 happy birthday to me :) 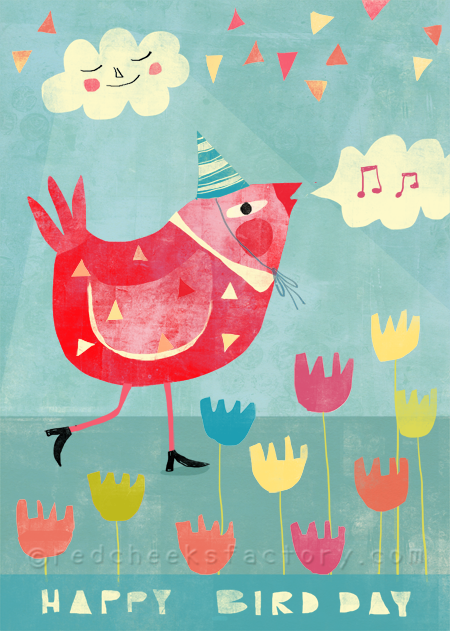 The summeschool of make it in design has started. It's an online course about making patterns and it's free. A lot of people are joining. It's fun! 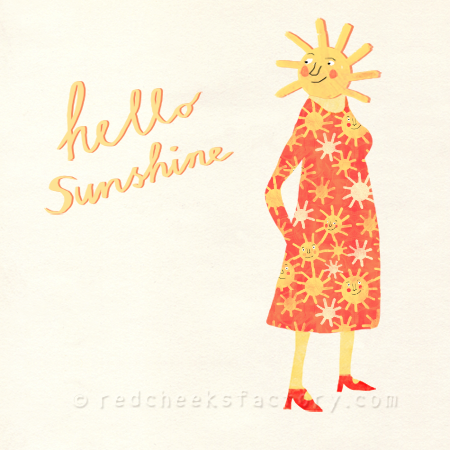 Every two weeks we get new assignments. You could sign up for different levels. Although I'm quite new to this subject, I signed up for all levels\ And I am not the only one ;-) It stimulates me to dive into the pattern world, a fascinating and inspiring world. 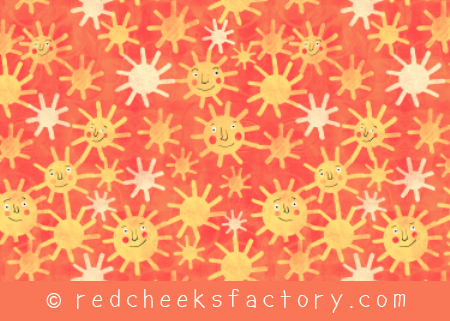 This pattern I made a while ago: hello sunshine and you can find it in my Spoonflower shop. Will be continued! I wish you all a nice and sunny weekend!
Posted by nelleke 1 comment:
Email ThisBlogThis!Share to TwitterShare to FacebookShare to Pinterest
Labels: pattern, patterns, spoonflower, study
Newer Posts Older Posts Home
Subscribe to: Posts (Atom)