Lisa Congdon is an artist which I admire for some time now.
She is an amazing artist and has an inspiring blog
But why I am sharing this with you today? 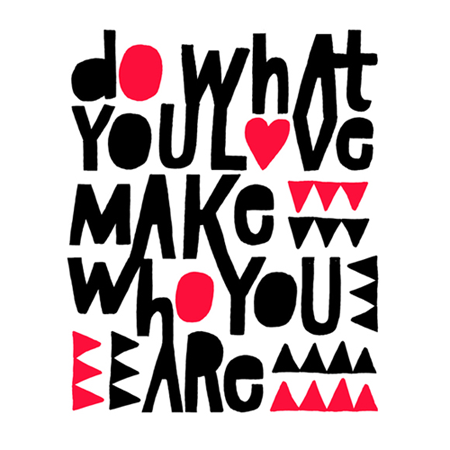 Because this morning I saw a VERY inspiring video: Embrace the abyss and other lessons were she talks about her creative journey and the many lessons she has learned.

She not only makes beautiful Art, but also has a lot of inspiring insights to share.
The video is about 45 minutes, but really worthwile to watch.  (To be honest: at the end I had tears in my eyes.) So I thought maybe more people want to see this :-) 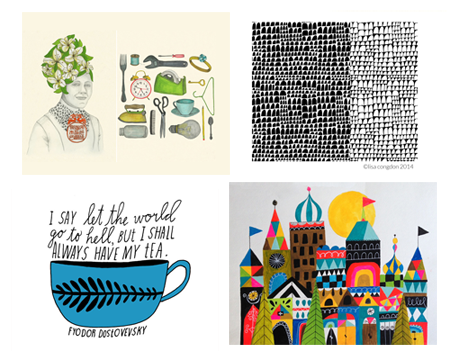 Here are a few examples of her work, but you can see much more on her website

The Wall Art Market was the subject of week 4 in the e-course Make Art That Sells.
For me the assignment was quite complicated.We were asked to make an abstract piece.
There had to be flowers in it, or at least one (because that sells ;-))
And a word or a quote. Preferably handmade with paint and collage-style. We also were given some colors. Mine were blue and orange.

Well, abstract isn't in my comfort zone at all, but with all these extra instructions,
I found it quite confusing. What exactly is abstract?

After a week of searching and struggling, I came up with this work. Titled: joy 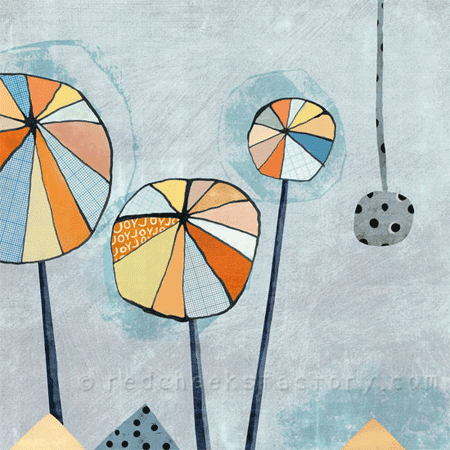 What do you think? Is this abstract to you?
Would you like to hang it on your wall? (if so, you know where to find me ;-))

First we had to gather all kinds of (in my case) orange and blue elements,
which you could use in the coming assignment. I made a lot of textures, using different techniques.

When we got the assignment, I started to look for abstract flowers and abstract Art.
Because of the collage-style I also looked in an old DADA book, where I found the Art of Jean Arp. Really nice shapes and interesting compositions. (See the first image below) 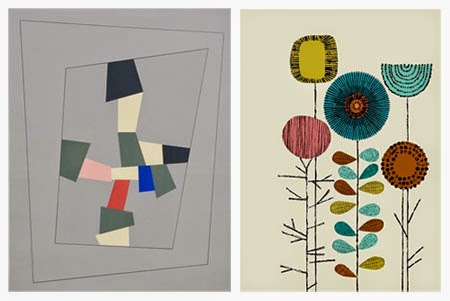 The image on the right above shows some abstract flowesr from Eloise Renouf,
I like her work a lot!

This week I found out there are lots of levels of abstraction. Somehow I knew this before, but  this week it was an eye-opener. For me the left image is more abstract than the right image. Abstract Art can still contain figurative elements. That's making abstract a bit less 'scary' than it was for me.

I played with shapes, and made the piece below, which I named Rhythm and Blue.
I'm really curious what you think of it and would love to hear your feedback :-)) 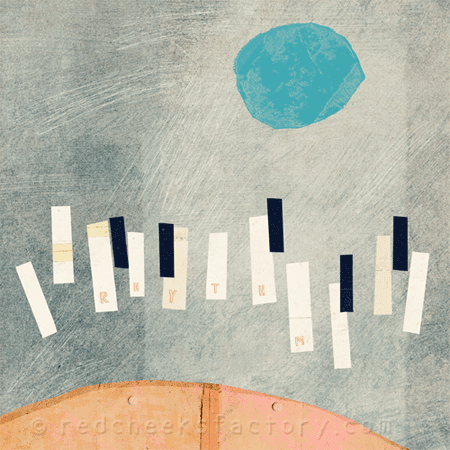 there were no flowers in it...


So I continued my journey. I made some versions of a giant abstract 'flower', but when I saw this the next morning I knew this was not working. I wouldn't want to hang that on my wall. But what I liked about it was how I integrated the word joy as a pattern within the 'flower'.

I also wanted to play more with repetition. 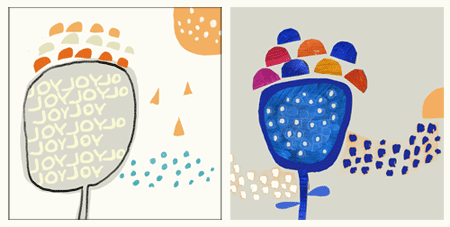 I added more flowers. Found other shapes, which I liked and made my final piece.
The word joy is integrated in one of the 'petals' of the shapes, so it is there, but not too obvious.

This week was the most difficult week till now, but after all I'm happy with the process. I'm a bit less 'scared' of abstract now. I'm curious if I will integrate this more in my future work. I hope so! 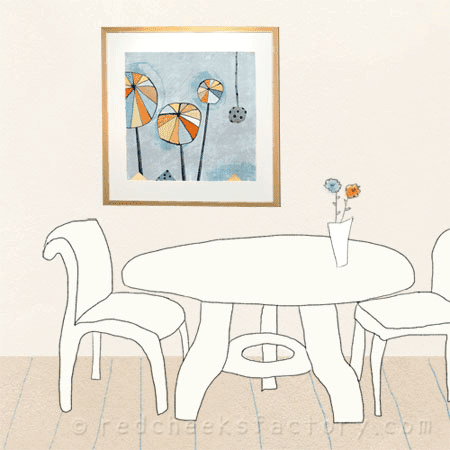 And there's only one week left of this inspiring course.
So this will be continued next week!

Children book page: the fox and the crow

This was my most favorite week so far in the e-course Make Art That Sells
I thought it would be, and I was right: The children book market!

Our assignment was to make a cover or a double page for a children's book,
based upon Aesop's fable: 'The Fox And The Crow' 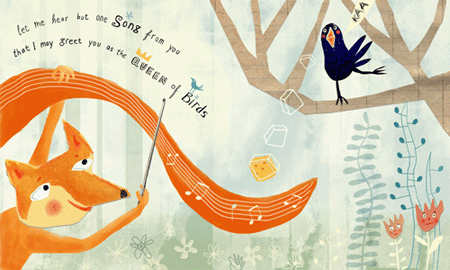 On Monday our inspiring teacher Lilla Rogers gave us the new subject: foxes.
My first reaction was: YES! I like to draw animals and I like foxes!

I looked on the internet for source material. Lots of beautiful foxes there!
I started to draw them. First realistic with pencil to get to know them more.
After that I played with shapes, lines and used all kinds of other materials. 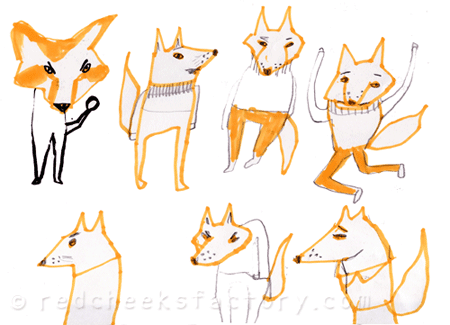 I found it very challenging and fun to add various expressions and attitudes to the foxes.
Also interesting to find out what makes a fox a fox: his pointed ears, his sharp nose
His color and ofcourse his beautiful tail. 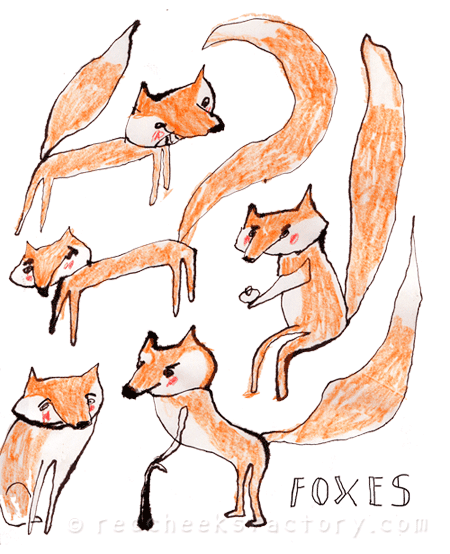 It was funny to see, the more foxes I drew, the longer his tail became :-)

After several hours of drawing, cutting, scanning and playing,
foxes were everywhere in my house.

Here a picture of my work in progress on my kitchen table: 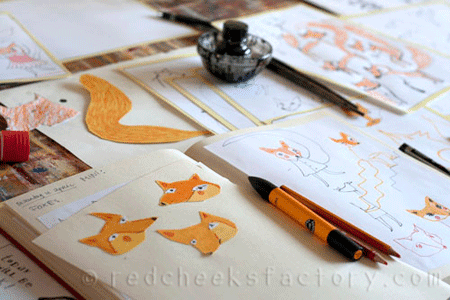 I came up with a fox character. I've played with the idea of his long tail.
That would be a nice idea for a story and it could bring my fox in several situations.

We knew there would be also a crow involved in the story, so I worked a bit
on their relationship too. And  tried to keep the character consistant,
which is quite a challenge: 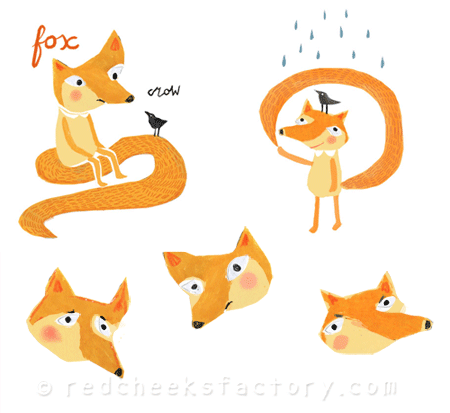 On Wednesday we got the big assignment: a cover or spread
after Aesop's fable: 'the fox and the crow' in your own style.


I first made several possible composition sketches. Here are two of them: 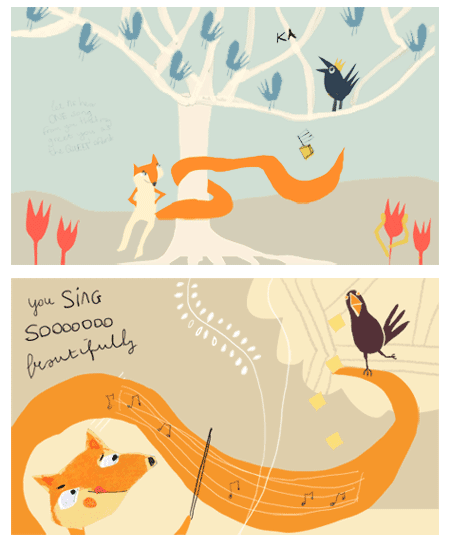 And  there was his loooong tail again:-)

At first I thought my fox would be too sweet to do something rude
to the crow (stealing his cheese) because in my head they where friends.

I liked the idea the fox was using his tail as a violin to seduce the crow to sing.
I chose that option to work on and built the spread.

We also worked on handlettering, which is also quite new to me.
I played a little bit with it, but I must say I need to explore this a lot more.

I came upon this inspiring handlettering site including
lots of tips, tutorials and videos about this subject.

Before I submitted my final spread, I first placed it in our facebook group,
I asked for some feedback, I thought there was someting missing, didn't know what.

A very good suggestion was to let the text follow the tail of the fox.
Besides all the information we get, is that another thing what I like so much about this course: the stimulating, supportive and positive atmosphere in the class :-)

Will be contined, another two weeks to go...

I've been quiet this week. I worked very hard.
Home decor was this week's theme for the e-course Make Art That Sells
Bedding, table ware, kitchen linens, bathroom items and anything else that
decorates your home. Again a totally new market for me.

Our assignment was to make 1 - 4 plates. I made these three: 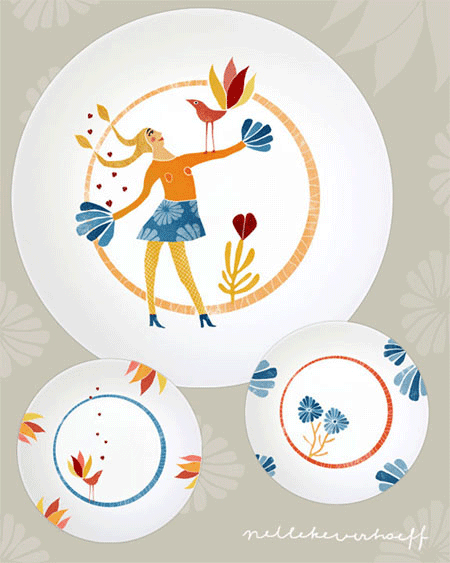 Let me tell you something about my creative process.
On monday Lilla Rogers gave us the new subject: succulents.
I had to look it up in my dictionarry. We call them: fat plants.
To be honest I was a bit disappointed.

But after googling and seeing all these weird shapes, I began to see the fun of it.
I drew lots of plants, with pencil, markers, pen and ink and collage.
It's a great oppurtunity to try different techniques and discover new things.
Two days of playing not knowing where it's leading to...
I made a lot of these simple cut out forms. Different from what I normally make. 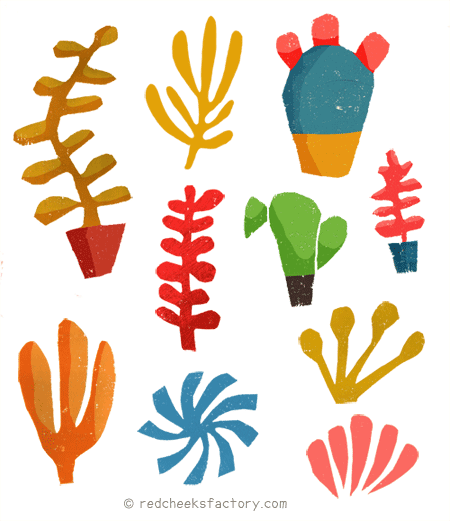 Then the assignment came: Plates. Huh, with these shapes?
My brain was working fast. How am I going to make this into something that suits me.
All those weird shapes. A weird world. I had to think of Alice in Wonderland.
Ah! Alice in Succuland! That was a beginning.
Then I could draw a person, that's what I like! I chose some of my succulent icons.

In the ink drawings I had seen some birds appear: 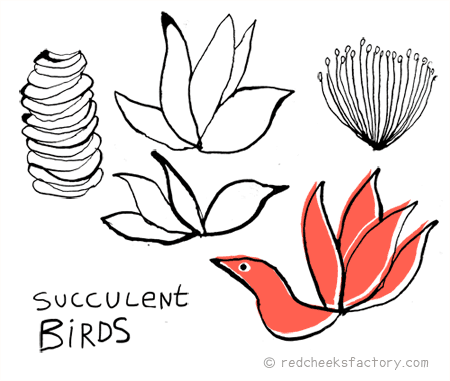 So I had a woman, a bird and my succlent shapes. I began sketching
My plan was to make four little scenes of Alice in Succuland.
I found out this idea was far too complicated for this purpose.
So I changed it and gave the woman some 'succulent' attributes.
And I've added the bird. 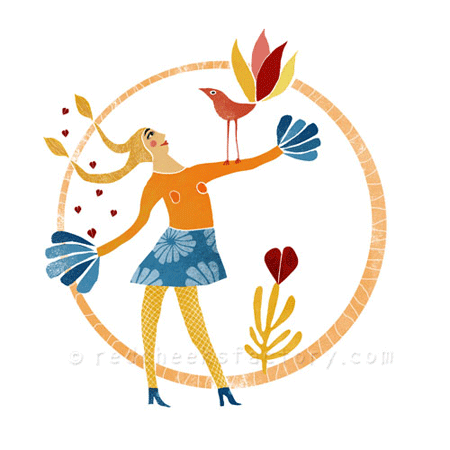 Now it was very challenging to add two more plates to make a series.
I made a lot of variations, looking for unity. For now I'm satisfied.
But there's a lot more to learn. The series is called: time for joy!
It maybe wasn't that easy, but at least I had fun (and sometimes not) during the process.

It also helps a lot to see all the other submissions.
Very inspiring to see how everybody deals with the subject.
Will be continued... :-)

So here I am again: After a week of diving into the bolt fabric market.
I finished my first assignment for the e-course Make Art That Sells 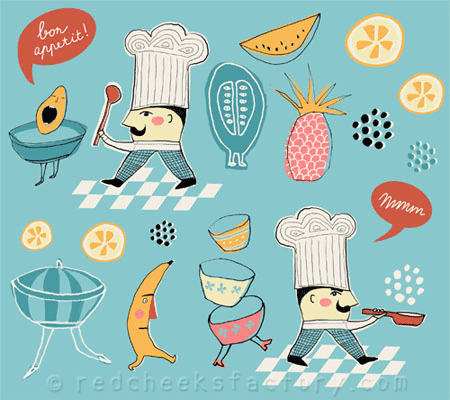 When you design motifs for fabric, it's good to see it as a whole pattern
It makes a lot of difference if you see your design just one time or repeated
on an apron for example: Then you can see how your design 'works'. 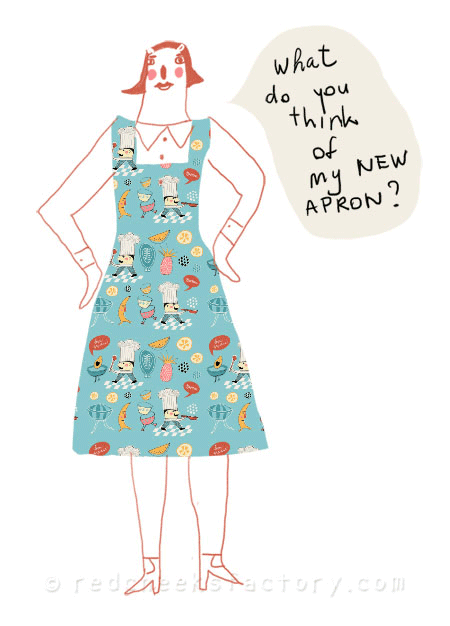 Together with the bolt fabric design we were asked to design some coordinates.
These are fabrics designs that go well with the main design, but much more simple.
You can use them together to make a nice quilt for example, or use them in other projects.

I've made these two. For me this is a whole new world.
All kind of new terms and ideas. I must say, I like it!
It's quite challenging and there's still a lot to discover and to learn :-)
I wonder what will next week bring! I'm curious.
Will be continued...

back to school again

The e-course Make Art That Sells with Lilla Rogers has begun!
We started on Monday. It is very inspiring and a lot of people are joining!
First week it's all about Bolt Fabric. For me a totally new market. 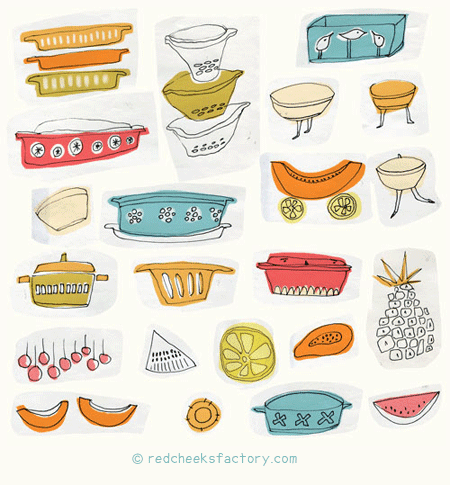 The first two days we worked on what Lilla calls: a Mini.
An assignment to loosen up and get familiar wirh the subject:
Tropical fruit and Vintage Pyrex Casseroles.


I've made a lot of drawings with pencil and a thin marker, scanned some of them
and colored them in photoshop. Above you see a mixture of fruit and casseroles. 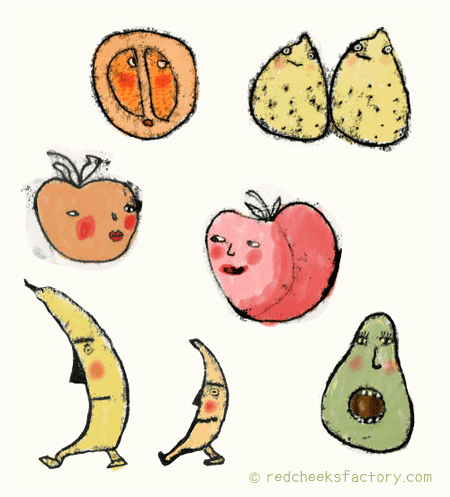 I also experimented with monoprint and gave my 'tropical' fruit personalities
It became a bit less tropical than I wanted it to be, but it's a start...

Today we will get the BIG assignment. I wonder what this will be.
It's all very exciting and inspiring, also to see the work of my classmates
Will be continued...
Posted by nelleke 3 comments:
Email ThisBlogThis!Share to TwitterShare to FacebookShare to Pinterest
Labels: make art that sells, study
Newer Posts Older Posts Home
Subscribe to: Posts (Atom)