In Holland we have a discussion about our traditional 'Sinterklaasfeest'.
Every year around December we play the game a bisshop arrives from Spain with a boat.
He brings lots of presents and Zwarte Pieten (black servants) along.
This may sound strange in foreigners ears, and people may think of rascism...

For many Dutchies Zwarte Piet is a kind of clown, making jokes and is innocent.
But nowadays we live in a multicultural society and more and more people are protesting against it. They want to change things about this tradition.

Now even the United Nations join in into this discussion.
They want to abolish it all. That makes a lot of dutch people angry. 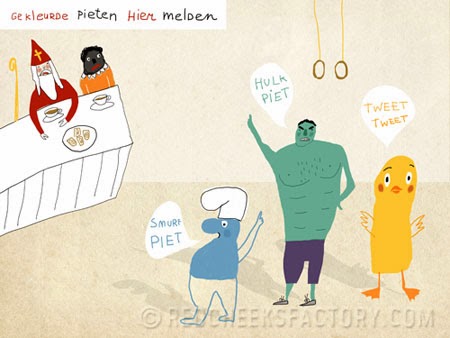 I've made two illustrations about this theme. Find them also on SaltyStock

The first one shows Sinterklaas en Zwarte Piet looking for coloured servants
instead of black ones. In the row of candidates a Smurf, the Hulk and Tweety,
all wanting the job ;-) 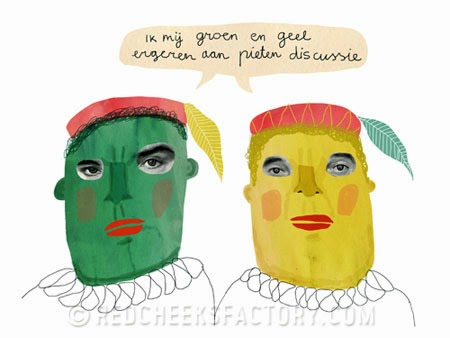 In Holland we have an expression 'jezelf groen en geel ergeren' which means
'to become green and yellow from annoyance'
That's were above illustration is based on. Maybe if the discussion
continues for a while, we will have all green and yellow Pieten ;-)

hey, maybe it's a good sign
Dutch people are well, and have no important problems to discuss! :)
have a nice weekend, Nelleke!!!! :))))